Elasticity 101 - Everything you Need to Know for CFA Level 1

Elasticity is a vital economic concept, and it's one the CFA Level 1 curriculum spends considerable time defining. Elasticity helps us understand how variable demand is in response to prices, which gives us a great deal of insight about market dynamics, the impact of taxes, and for the purposes of the exam, also indicates whether a specific good is elastic, inelastic or a substitute/complementary good.

All in all, the concept itself is foundational and you should expect the CFA Level 1 exam to test it directly.

There are three basic varieties of elasticities which we need to be aware of, all of which drive at understanding the sensitivity of consumers to changes in price.

Let's cover each in turn.

(Own) Price Elasticity of Demand 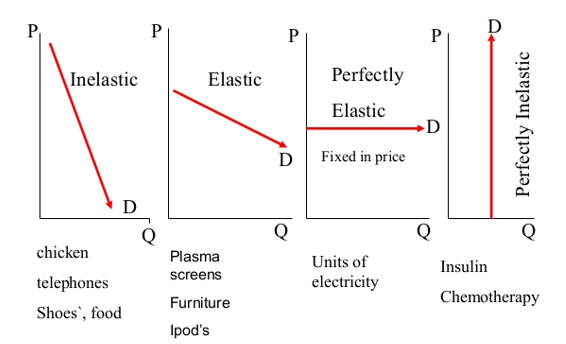 How do you tell if a good is elastic or inelastic (something you will probably have to do on the CFA Exam)?

You should understand that the relative elasticity of a good varies based on how much we need it. Things like shoes or food or basic services have relatively inelastic demand. We're going to buy shoes no matter how high the price goes because we can't do without. Luxury goods that we can more easily go without, however, have more elastic demand. If the price of a new plasma TV skyrockets chances are we won't buy it (or we'll buy an LCD TV). This highlights another determinant of elasticity which is that if a good has many substitutes it will have more elastic demand.

Elasticity and the Demand Curve

Elasticity changes as we move along the demand curve.

This is a significant and testable concept for the CFA Level 1 exam. You will need to know where Total Revenue is maximized and which parts of the demand curve have elastic/inelastic demand.

As we move along a linear demand curve we can actually see that elasticity changes, moving from more elastic to relatively inelastic. In other words, in the upper part of the demand curve the absolute value of elasticity is > -1 (i.e. the % change in quantity demanded is greater than the percentage change in price). At the midpoint it equals – 1, i.e. it is unit elastic. Finally on the lower half of the demand curve it is less (in absolute value) than -1. 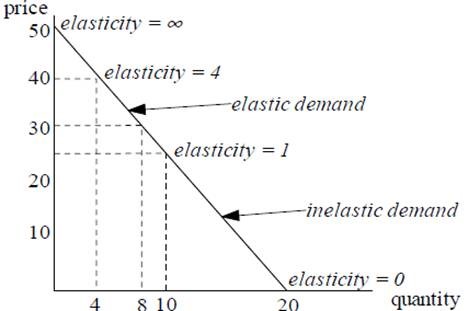 From the perspective of a supplier, the elasticity of demand is an important consideration when considering the impact of a price increase on total revenue, where we define total revenue as (Q x P).

At relatively high prices (the upper half of the demand curve) where demand is elastic, total revenue will increase (decrease) when prices decrease (increase) since the percentage growth in quantity demanded will outweigh the percentage decline in price.

On the lower half of the demand curve where we have inelastic demand the opposite is true. Total revenue will increase when the price is increased as the change in quantity demanded will be less than the percentage change in price.

The midpoint of the demand curve, where we have unit elastic demand, represents the point of maximum total revenue.

Be prepared for a question testing your understanding of normal and inferior goods.

So far we've been talking about the elasticity of demand as it relates to the price of the underlying good itself. But that is not the only type of elasticity (or at least, not the only way to represent and understand elasticity).

We capture the actual measurement of how sensitive the change in quantity demanded is to shifts in income using the income elasticity of demand.

The basic principle is the same except we substitute income into the denominator instad of using a good's price:

Most goods, called normal goods, have a positive income elasticity—as incomes rise we want to purchase more. Graphically this would be shown as a shift of the demand curve up and to the right.

However there are goods where quantity demanded decreases as income rises (they will have a negative elasticity). These are called inferior goods.

Can you think of an example of an inferior good? How about spam? Generally spam is purchased to eat if you can’t afford meat. As your income rises you would shift your consumption and decrease the amount of spam you buy.

Be prepared for CFA L1 exam questions asking you to identify a good is complementary or a subtsitute for another good based exclusively on cross-price elasticity.