Which Institutional Investors use ALM?

Institutions with fewer constraints on their liabilities can use an asset-only approach to investing their assets. The only goal with AO is to maximize total return. You don't have to explicitly consider liabilities.

But institutions with important liabilities that must be funded (legally or otherwise) have a lower overall risk tolerance. In other words, these institutions (of which pension plans are a prime example) have to consider the investment portfolio in the context of their liabilities. This is the asset liability or ALM framework we saw explained in Level two. The primary investment goal of conservative institutions using ALM is minimizing shortfall risk. At its core, this is done by investing in assets that have a high correlation to liabilities. That way if liabilities increase, assets should too and vice versa.

Here's a summary of which institutional investors covered in the CFA Level 3 curriculum use ALM: 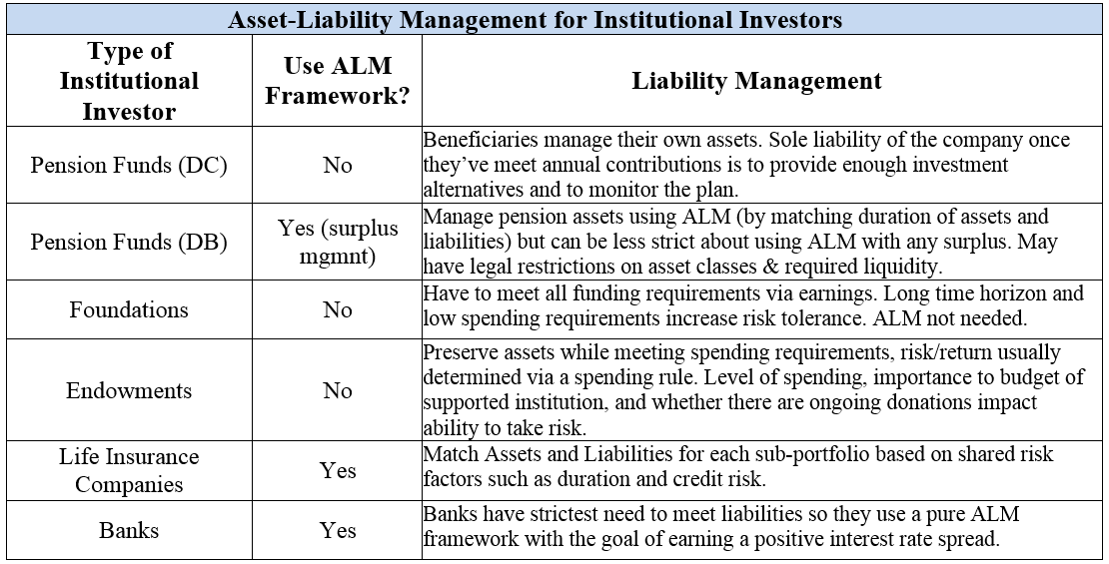 As you can see endowments and foundations are the two main institution types that really don't have to use ALM but banks, life insurance/property and casualty insurance companies and defined benefit pension plans all do.

That said, the exam could try to make you guess whether an institution should use ALM or AO. In this case an institutional investor (such as a bank, DB pension plan, or insurance company) would choose ALM over AO if:

The last three reasons for using ALM over AO are tied specifically to interest rates and fixed income investments. Namely ALM is more attractive when:

The rest of this post covers ALM in a pension context, however, since this is the section and the examples that the CFA Level 3 curriculum material focuses on. Before we dive in, note that this post i part of a four part series covering pension plans for L3.

With the defined benefit pension plan, we saw legally binding obligation to employees by the firm that really constrains their ability to take on risk. That means they have to construct a portfolio that's really cognizant of that trade-off and then the implication being you select assets that have higher correlation.

So DB pension plans use ALM. But how does this work in practice?

ALM is built to hedge risk right? So the first step in knowing what to invest in is to understand what types of risk you are hedging against.

The Three Types of Risk ALM Hedges Against

There are three types of primary market risks that we look to hedge. These are:

We hedge each with different financial instruments, in this case nominal bonds, real rate bonds and equities which can hedge interest rate risk, economic growth, and inflation respectively:

For a defined benefit pension plan, what we need to consider (and what makes it a little more complicated) is that the plan faces different levels of these three market risks depending on the proportion of the demographic groups that compose the pension fund, namely active lives and retired lives. And so, that informs what types of assets we pick to match the different liabilities.

Active vs. Inactive Lives
Think about it this way. Inactive participants are not really accruing any additional benefits so everything that the company owes them in the future is reasonably predictable. This means you can then hedge their payments with bonds where the cash flows and principal payments are predictable and known with reasonable certainty.

Active participants are much more complicated, however, so we need to construct a dual hedge. The first hedge covers their accrued benefits, which are benefits that they've already earned. These benefits have similar characteristics to inactive lives and can be hedged the same way.

The second hedge is for their future benefits, the total amount of which is a function of their future wages which we expect to grow over time.

Now to see how we need to hedge this future benefit we have to decompose wages. Traditionally wage growth is due to two separate things: inflation and the growth in real productivity. The inflation component we can hedge with nominal bonds, while the growth component we hedge with equities.

The proportion of each asset you hold should match the relative size of the plan's workforce. So if 15% of the plan's participants are active for example, then 15% of the portfolio should be built using those liabilities than making assets.

A couple other points to bring up here.

Risks and Shortfalls of Using ALM

ALM is a really good framework. It matches cash to liabilities. It tries to mimic and correlate the different market risks so that we don't deal with any shortfalls. But, there are some risks to relying on it.

Types of Liability Noise for Pensions

Summarizing ALM in a Pension Context

All right. So we've covered a lot and we've covered the probably most important and most testable institution in defined benefit plans and then we've talked about ALM versus AO. You should understand the basic implications on ability to take risk, which types of institutions must use ALM (and when), and why.

From a pension perspective you should know exactly how to hedge liabilities based on the workforce characteristics of a plan as well as some of the potential risks of relying on ALM. Finally, keep in mind the tradeoff between ALM (less aggressive investments) and the manager's occassional desire to build a surplus.