This section originally appeared as a stand-alone section inside of Estate Planning but dovetails well with the tax reading. See Question 7 on the 2015 morning exam for direct practice.

First up is Source Jurisdiction. Source jurisdiction is where a country taxes all of the income generated within its borders. So, regardless of where you are from, everything you do within a source jursidiction country will be taxed. Think of the source we're talking about here as referring to where you make your money. This definition is also why a source jurisdiction is also sometimes called the "Territorial Tax System",

Next we have residence taxes. Residence Taxes are the more prevalent regime. Under the residence tax system, a country will tax the income of its citizens regardless of where they generate that income (and also impose a transfer tax on all assets). With a residence tax, there's no escaping your country of birth. Remember, countries are greedy!

Imagine you live in a source jurisdiction country that's taxing your economic activity because you live and work there, but you also are from a residence country that taxes you because you're born there. In this situation you will be double taxed.

This is a very common issue and is usually dealt with via tax treaties. Now there's really three ways it arises. In a residence-residence conflict two countries are basically claiming the same person as a citizen. In a source-source conflict two countries are claiming the same asset or income. And a residence-source conflict happens when the income you generate in one country is also subject to residence taxes based on the jurisdiction.

To summarize what we've covered so far: 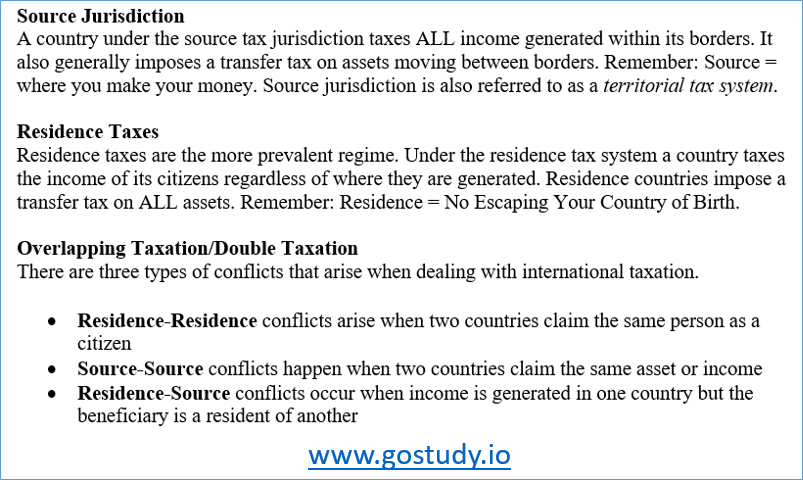 The first is the Credit Method. The credit method offers a complete resolution of this double taxation issue by giving a tax credit to the individual for any taxes that they pay to a source country. Under the credit method the overall tax that you pay on that source income is going to be the greater of the two country tax rates. In other words, if the source country tax rate is quite low, you're going to have to pay the difference to the residence country.

Next we have the Exemption Method. The exemption method also offers a complete resolution of the double taxation problem.  Under this method, the residence country (the country of your birth) exempts taxes on all foreign income earned in any source country. As a result, if the source country has a lower tax rate than your residence country you could benefit. So I am from the Netherlands and their tax rate is way higher than the country I live in, the United States. But the Netherlands exempts me from paying taxes on any income I earn in the States. I will benefit by paying the lower US tax rate on my income and shielding that from the higher Dutch one.

Finally, we have the Deduction Method. The deduction method only offers a partial resolution. Under this method you first pay the full amount of tax you owe to the source country (the country you are working in). Then you deduct the amount of you paid in taxes from your worldwide global income and that global income number minus source taxes then it gets taxed by the residence country.

As a result you end up paying a higher effective tax rate.