For the CFA Level 3 exam study session 9, Principles of Asset Allocation, we begin with the actual process of building a strategic asset allocation plan, the first step of which is to map out the universe of efficient portfolios you might invest in.

Put simply, first we generate what options are theoretically ideal from a risk/reward perspective and then we decide how to place our bets. In previous levels this has focused on mean variance optimization (MVO).

For CFA Level 3 we start with MVO but then look at three other alternatives that address some of MVO’s shortcomings. For the exam know the pros/cons of each approach and their implications for portfolio concentrations and rebalancing concerns.

Generating and Interpreting the Efficient Frontier

The entire process of asset allocation involves a portfolio manager selecting a specified return on an efficient frontier and using historical data for asset class returns, standard deviations, and correlations to run various simulations to create a set of mean-variance portfolios.

There are a variety of approaches of estimating this efficient frontier, each with their advantages and drawbacks.

For the CFA Level 3 exam you need to know:

This post is concerned with mean variance optimization (both constrained and unconstrained).

Mean Variance Optimization, or MVO, involves taking the expected return of each asset, the standard deviation of each asset, and the correlation between assets to create an efficient frontier, or set of portfolios with the lowest risk for any given level of return.

There are two types of MVO: constrained and unconstrained.

In theory, MVO should generate a list of minimum variance portfolios to select from based on desired risk and return characteristics: 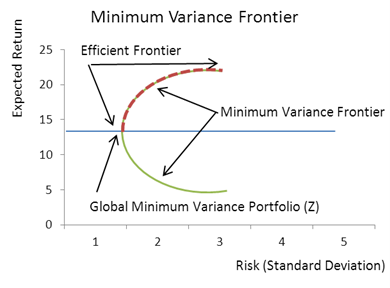 From the global minimum variance portfolio we can add in a risk free asset to get the CML/CAL depicted below. Portfolios on the CML/CAL dominate the EF. 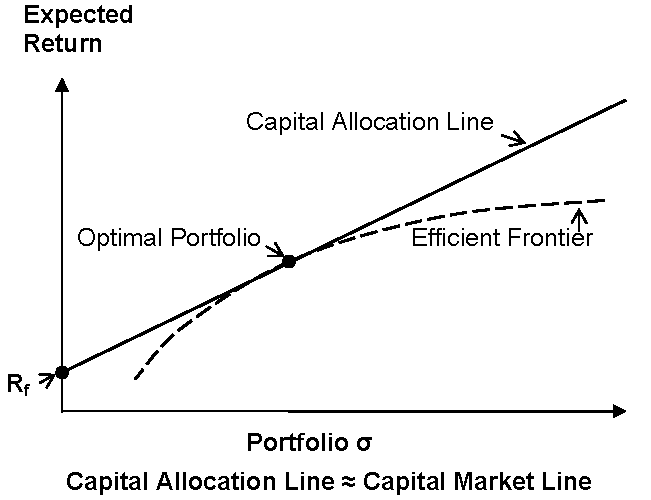 Mean variance optimization has many advantages and disadvantages. For the CFA Level 3 exam you will want to be very comfortable comparing MVO to both the Black Litterman and reverse optimization approaches to creating a market efficient portfolio.

There are many drawbacks to MVO including that it: