How does level one test consumer surplus, producer surplus, and total surplus?

In Study Session 6 on Economics, Reading 13 is vital. Not only does it introduce supply and demand, whose importance to economics and market behavior is foundational, but it alone is important enough to pay close attention to this reading. However the most testable material for the L1 exam itself lies in understanding how supply and demand interact to inform market structures and determine the relative benefits that accrue to producers, consumers, and thus to society as a whole.

You should also know the theory behind maximizing social welfare and the government policies that create deadweight loss (or restore market efficiency) and when they apply.

What is Consumer Surplus?

The difference between the total value of the goods purchased and the total price paid for those goods is known as consumer surplus (CS).  Graphically it is the area under the demand curve and above the purchase price up to the # of units purchased.[1]

As you can see, Consumer A was willing to pay $5 for a hamburger but only had to pay $2.50. Their individual consumer surplus is equal to that difference. If we add each consumers difference up to the quantity sold we get the consumer surplus of the entire market.

Note that in this interpretation we are treating the demand curve as the marginal benefit curve because it shows the highest price that buyers are willing to pay for each additional unit. As the quantity of goods owned increases the marginal demand or willingness to pay for an incremental unit decreases (see utility theory).

Producer surplus (PS) is similar to consumer surplus but from the perspective of the suppliers. It is the difference between the price producers receive for the total number of sold goods and the cost they pay to produce those goods.  That is:

Where total revenue = # of units sold * price per unit.

Graphically, if we assume perfect competition, the supply curve can be interpreted as the marginal cost curve, where marginal cost is defined as the lowest price at which a seller is willing to sell the next unit of a good.

Producer surplus is shown as the area above the marginal cost curve and below the price line up to the quantity produced.[2]

Total Surplus/Social Welfare - The Sum of CS and PS

Total surplus is the sum of the consumer and producer surplus. We can think of it as the net value to society, or social welfare:

Note that in a competitive market the area of maximum social welfare occurs at market equilibrium where Qs = Qd (i.e. where Price = Marginal Cost). 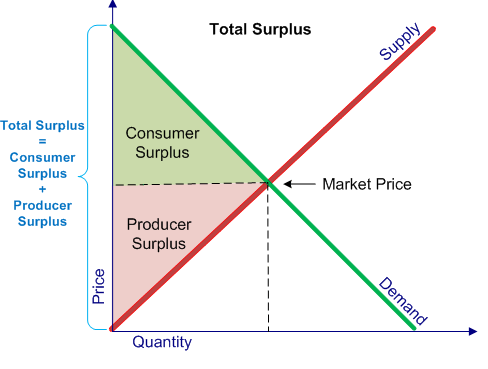 The division of total surplus between consumers and suppliers is an important indicator for the nature of the market. From the standpoint of equality and bargaining power alike, we care about whether consumers or producers are benefitting more.

To determine the answer we look at the relative steepness of the supply and demand curves.

If the social welfare maximizing point occurs where QS = QD, then any deviations from that point are inherently inefficient. In other words, sources of inefficiency result in either producing too much or too little of a good. They can be caused by:

The overall amount, or level, of market inefficiency is called deadweight loss (DWL). Think of deadweight loss as the total reduction in consumer and/or producer surplus.

We look more carefully at deadweight loss and the soruces of this inefficiency in our next post.