In our previous post on consumer and producer surplus we talked about the social welfare maximizing point occuring where where the quantity supplied equals the quantity demanded (QS = QD).

This means that any deviations from that point are inherently inefficient. Sources of inefficiency result in either producing too much or too little of a good relative to its supply and demand.

This state of overproduction or underproduction can result from different causes including:

The overall amount, or level, of market inefficiency is called deadweight loss (DWL). DWL a loss of economic efficiency that can occur when equilibrium for a good or service is not achieved or is not achievable. It's easiest to think of deadweight loss as the total reduction in consumer and/or producer surplus.

In a second we’ll look at the various sources of DWL, but first we need to understand how to see DWL (and then how to calculate it).

Previously our calculations of producer and consumer surplus have essentially been calculations of the area of a triangle between the demand and supply curve and the price.

Calculating deadweight loss is no different. We calculate the area of the new triangle which either reflects the loss from overproducing or the value forgone by under-producing (the yellow triangle).

The Sources of Market Inefficiency

There are two broad sources of DWL: externalities and government imposed sources of inefficiency. Let's cover each in turn.

An externality occurs whenever there is a situation in which the production or consumption of a good has spillover effects onto those who are not directly consuming or producing that good.

Put differently, anytime there are broader social impacts that are not captured by the supply and demand graph we face externalities.[1]

For example, if there are harmful environmental impacts from producing say, oil, then the true marginal cost of that production is actually higher than is graphically represented (i.e. we would shift the supply curve up to reflect a higher marginal social cost).

This negative externality causes us to overproduce oil relative to the efficient level.

Similarly if there are positive externalities from producing a good (i.e. building schools), then we might under-produce that good relative to its benefits (the true demand curve for society, as represented by its marginal social benefit curve -MSB shifts up).

Here is a graphical example of a deadweight loss caused by under-producing a good with a positive externality:[2] 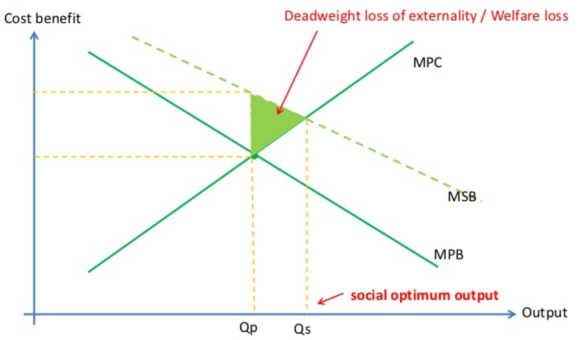 With either positive or negative externalities the under or over production represents market inefficiency and thus creates a deadweight loss.

In this section we cover price controls (floors and ceilings), subsidies, quotas, and taxes and trade restrictions. All of this material is highly testable. You should be able to model (graphically) the impact of each of these government policies and perform the requisite calculations. Pay particular attention to the relative burden of taxes as it relates to elasticity.

Government policies can distort markets and create inefficiencies. But in markets with externalities or in public gods markets government policy can actually ensure a more efficient outcome.

The most common example of positive government intervention occurs with public goods. A public good is a good or service that is used by consumers whether or not they pay for it directly. Examples include roads and national defense. The central idea here is that because individuals are not paying for the goods the markets will tend to under-produce such goods. This is also known as the free-rider problem.

Another example where government intervention can be a positive occurs with common resources. Common resources are open for all to use (e.g. fisheries). The drawback with these goods is that each individual using the resource has little incentive to maintain the resource and in will in fact tend to over-use it (i.e. over-fish and deplete the ocean). Thus common goods tend to be over-produced relative to the efficient amount.

With that context in place, let's look at specific government policies that can lead to deadweight loss.

Price ceilings represent a maximum limit on the price suppliers can charge. A common example of a price ceiling is rent control. 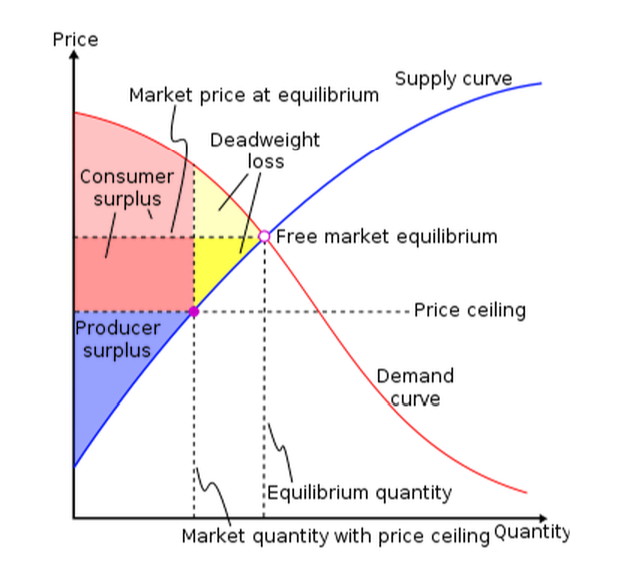 As you can see the supplier will only produce the good up until the ceiling price intersects the supply curve instead of the optimal amount.

Signs/impacts of a price ceiling can include the following:

We see many of these effects in rent controlled apartments which are often poorly maintained with landlords more susceptible to bribes.

The Effect of Price Floors

Price floors represent a minimum mandated price that a buyer can offer a good or service for sale. 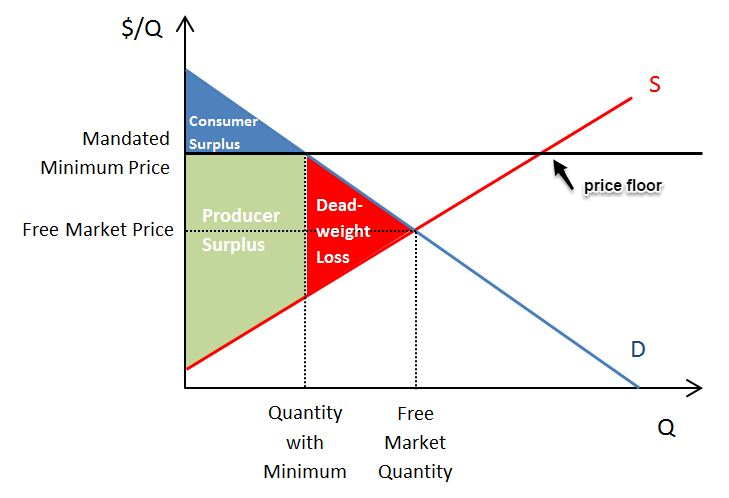 A per-unit tax will increase the purchase price of a good and thereby decrease the equilibrium quantity. Graphically this is represented as either an upward shift in the supply curve if the tax is levied on producers or a downward shift of the demand curve if buyers are being taxed. Either way the amount of the tax is the difference between what buyers pay and sellers receive.

The overall DWL that results from a tax depends on the reduction in quantity demanded and the actual size of the tax.  Be able to not only discuss the chance in quantity, the change in CS/PS, but also the net revenue of the tax, which is calculated as the new Qd * tax per-unit.

You should also realize that no matter who the tax is levied on both buyers and sellers are effectively bearing some of the burden of these taxes.

Subsidies are payments from the government to producers for each unit produced. The most common example in the United States is a farm subsidy.

Quotas are the last form of government intervention we cover.

Quotas are a government imposed mandate on the maximum number of units that may be produced over a given period of time. OPEC has occasionally been known to put a quota on oil production for example and many protectionist governments limit the number of imports through quotas.

By capping the supply, quotas increase prices and decrease the quantity demanded: 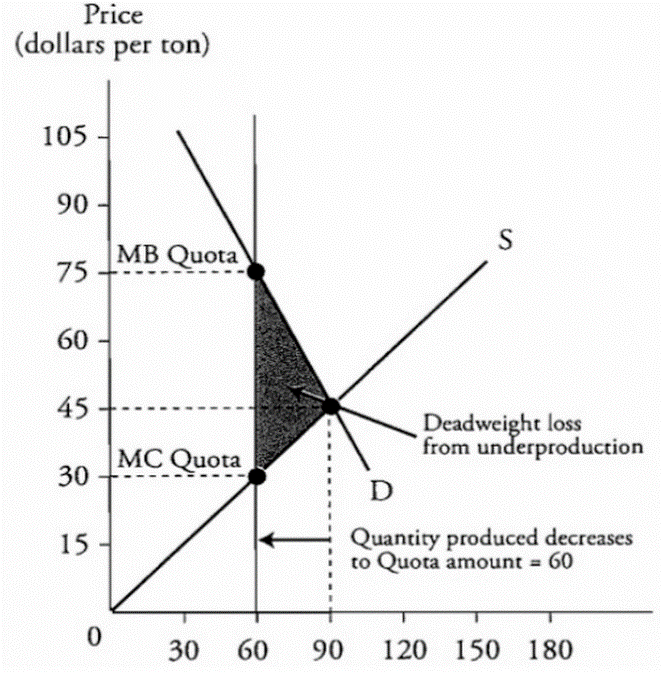 As you can see, there are a variety of ways that an externality or government intervention can shift the market to produce an amount other than the perfectly efficient equilibrium amount. For the L1 exam you need to know how each of the ways listed above do this. In other words, do they shift the demand or supply curve or impose an artifical constraint on the amount that can be produced and exchanged? Once you understand the shift (which could be tested directly), it's a simple matter of identifying the new equilibrium point and performing any necessary calculations for the new DWL triangle. Stay alert for instances where you need to compare the new total surplus to the old total surplus as well.

Our next post on elasticity will help you understand what we mentioned in the tax section about the relative burden between consumers and producers and how to determine who bears the cost (elasticity is also extensively tested as a stand-alone concept).

[1] Makes sense right? It is anything external (exogenous) to our supply and demand model.