Which Foundation/Endowment Has A Higher Ability to Take Risk?

You should expect 20+ points in the morning section of the CFA Level 3 exam to cover Institutional Investment Policy Statement (IPS) material. A core component of this type of problem will likely involve a compare-contrast question about the relative ability (or willingness) of two institutional investors to take risk.

We've covered the risk factors for a defined benefit pension plan and those of insurance companies previously. In this post our aim is to help you identify the factors affecting a foundation or endowments willingness or ability to take risk.

Identifying the Risk Tolerance of Foundations and Endowments

The Risk Tolerance of Foundations

Foundations are usually more aggressive than Defined Benefit pensions because they don’t have any legally binding obligations and they have an infinite time horizon. Because their obligations are desires they can employ an Asset-Only approach instead of using an Asset-Liability framework. If the annual spending requirement is low relative to the asset base (say 7% or less), then the ability to take risk increases. If a smoothing rule is used to reduce volatility of the required payments this also increases the ability to take risk.

The Risk Tolerance of Endowments

Because of their indefinite time horizon endowments have an above-average ability to take risk.

The only caveat here is the degree to which an organization depends on the endowment to meet their spending requirements. If the endowment is the only funding source or is used to meet a significant portion of the organization’s spending (20-25%) then the fund’s ability to take risk is comparatively lower than if they were only funding 5% of the budget.

As a rule foundations and endowments are MORE aggressive and have a GREATER ability to take risk than a DB Pension plan (note: this is a common CFA Level 3 exam question).

In contrast, a DB pension plan's liabilities are legally binding, and while the plan itself may have an indefinite time horizon the duration of its liabilities is tied to when the employees that are part of the plan will require payment. Thus the liability duration itself is finite, even if long term.

But which endowment/foundation has greater ability to take risk?

First up, this will be an apples-to-apples comparison question if it comes up on the L3 exam. You'll most likely be dealing with two endowments, but in theory it could be two foundations as well, or a foundation-endowment.

Whatever the case the principles are the same.

Here's how to tackle the problem:

First, look at the degree to which endowment is the primary funding source for the beneficiary org. If the organization they support depends on the endowment, say 70-80% of its operating budget, this reduces the foundation/endowment's ability to take risk.

Next, look at whether there is an ongoing source of funds flowing into the foundation or endowment. If a donor is continuing to provide funds this would increase the ability of the organization to take risk because those funds could be used to cover any liquidity needs. Pay attention to problems where the donor is planning to cut off funds in the future.

Third, look at whether or not a smoothing rule is being used. Smoothing rules, which we've also discussed before, smooth out year over year volatility in an endowment or foundation's required spending rate. Lower volatility increases the ability to take risk. So all things equal, an endowment using a geometric or three year spending rule will have a higher ability to take risk than one using a simple spending rate.

Four, look for any liquidity outlay. Obviously the more liquidity needed in the short-run the lower the ability to take risk.

Last, the passage may include detail about the foundation or endowment having stated limitations in their willingness to take risk (see willingness vs. ability). For example a foundation's board might not be willing to accept a shortfall risk above a certain amount, or might not be willing to try to earn a rate of return over the minimum required.

What would this look like on the CFA Level 3 exam?

In practice a problem could have these risk details embedded in a passage that look like this: 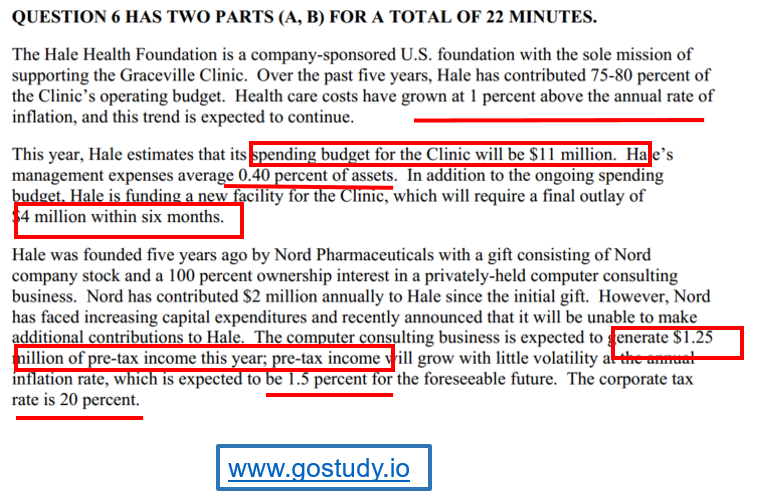