Financial ratios are useful in comparing various parts of a company's financial statements against others in its industry, both to determine the company's overall financial position and to look at its relative performance. We typically use changes in ratios as flags or indicators that there may be an area that requires further analysis.

On the CFA Level 1 exam, expect to see dozens of questions that use ratios.

Some may require you to calculate a specific ratio, but questions are more likely to require you to link back deeper into the financial statements themselves before then tracing their effect on some of the underlying ratios. This isn't rocket science, but it will require you to have a firm grip on how the income statement, balance sheet, and other statements link to one another.

For our key tips on answering ratio questions see this post.

That said, you also need to understand the basics of how to use ratios, and which ratios are most commonly used for various purposes. Let's get into that now.

What do we analyze using financial ratios?

We can use ratios to:

What are the main limitations of using financial ratios?

But ratios aren’t perfect. Limitations include the fact that:

What is the significance of these limitations for financial analysis?

Because no single ratio is conclusive we need to compare many different ratios against a company’s stated objectives. This lets us draw a more accurate picture of whether the ratios are moving in lockstep with the company’s strategy. The nature of ratios also means we should compare those of one company against the rest of the industry.

An analyst must also remain aware that:

There is no true standard set of ratios, but the curriculum does introduce five broad buckets into which we can categorize ratios.

Note that ratios are not mutually exclusive, i.e. they can fall under more than one category.

Activity ratios measure how productive/efficient a company is in using its assets which is why they are sometimes known as operating efficiency ratios or asset utilization ratios. Note that the ratios that use a balance sheet value use the average vaue for a given period (beginning +ending values/2):

Liquidity ratios measure a firm’s ability to meet its short-term cash obligations. As we’ve covered, the first three ratios are only different in the assumed liquidity of the current assets we include in the numerator. 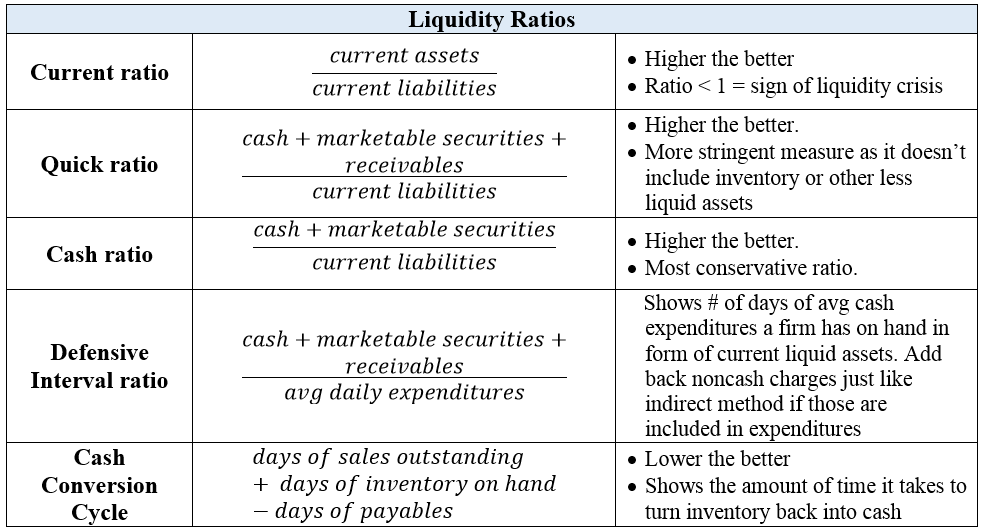 Profitability ratios measure the overall performance of the firm relative to assets, equity, capital, or revenue. Calculating how profitable a firm is, in some respects at least, the holy grail. It is worth noting before introducing the different ratios that many of them use slightly different different definitions for types of earnings and profit. You need to understand and be able to calculate/differentiate between EBITDA, EBIT, and EBT for example. 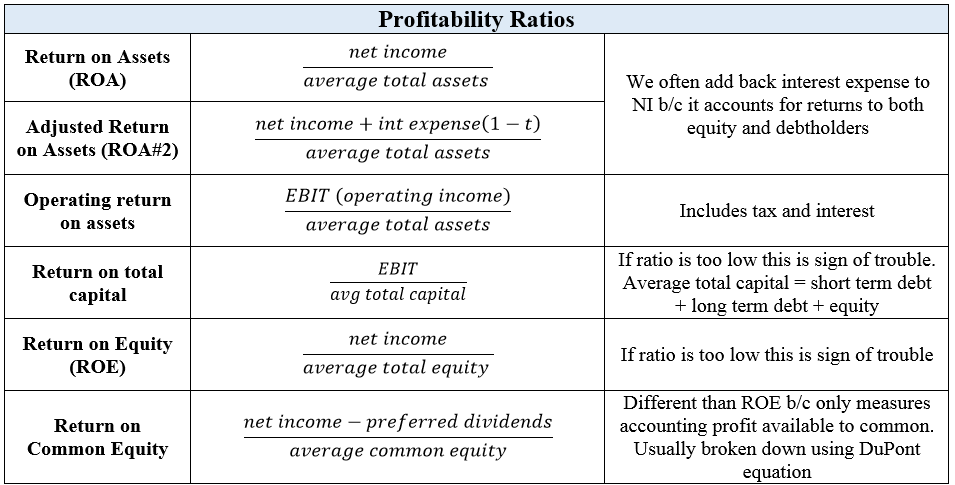 Having covered in great depth the various ratios and the advantages and pitfalls of using them, let me end with a few observations.